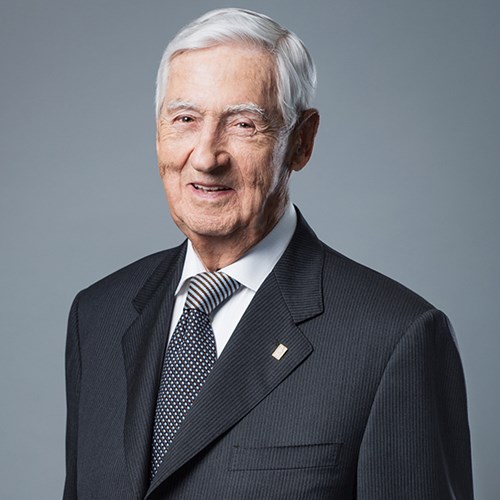 André Chagnon, the son of a prosperous contractor-electrician, was born in Montreal in 1928. Following in the footsteps of his father, in 1957, at the age of 29, he started an electrical service company, E.R. Chagnon et Fils Ltée. Seven years later, he sold his company to focus his energies on cable television.

In 1964, he founded Vidéotron Ltée, a regional cable television company that, under his leadership, would become the third largest telecommunications company in Canada, and the market leader in Quebec through an acquisition-based growth strategy.

In 2000, Quebecor Media Inc. acquired Le Groupe Vidéotron and its regulated cable, television broadcasting and telecommunication subsidiaries. After a 37-year career, André Chagnon gave up the reins at Le Groupe Vidéotron. He and his wife Lucie, along with their five children (Johanne, Claude, Christian, Élaine et Isabelle) decided to devote their time and efforts to setting up the Lucie and André Chagnon Foundation, which is currently the largest family foundation in Canada.

In 2000, the Chagnon family contributed $1.4 billion—a significant portion of the family assets— to the Foundation, whose mission is to prevent poverty by helping to create conditions that will enable all young people living in Québec to develop their full potential.

The philanthropic and business communities alike have repeatedly saluted the achievements and humanitarian commitment of this highly respected businessman and pioneer of technological innovation. In 2002, André Chagnon was inducted into the Canadian Business Hall of Fame in recognition of his exceptional business achievements and philanthropic works.

In 2003, he was named Grand bâtisseur québécois des technologies de l’information et des communications (Québec pioneer in information and communication technologies) by the Fédération de l’informatique du Québec. That same year, he was a recipient of the Medal for Exceptional Contributions to Early Childhood Development, awarded by the Centre of Excellence for Early Childhood Development, an organization founded by Health Canada.

In 2004, the Fédération des chambres de commerce du Québec awarded the Prix du mérite philanthropique (award of merit in philanthropy) to Lucie and André Chagnon. That same year, André Chagnon was named a Great Montrealer by the Board of Trade of Metropolitan Montreal. He was also awarded an honorary doctorate by McGill University, Concordia University and the University of Ottawa.

In 2005, Ernst & Young Québec granted him the Entrepreneur of the Year 2005 Lifetime Achievement award.

In 2007, the Lucie and André Chagnon Foundation was awarded the gold medal of the Order of Merit by the Fédération des commissions scolaires du Québec.

In 2008, André Chagnon was granted an honorary doctorate by HEC Montréal in recognition of his remarkable professional success and exceptional generosity.

In 2009, he was inducted into the Canada's Telecommunications Hall of Fame.

In 2015, André Chagnon was awarded the Medal of Honour of the National Assembly. (Lucie Chagnon was awarded the Medal posthumously.) The Medal of Honour (Médaille d’honneur) is bestowed on public figures who have distinguished themselves through their career, actions or commitment, and who are deserving of recognition by the Members of the National Assembly and the people of Quebec

In 2016, the Institute for Governance of Private and Public Organizations (IGPPO) recognized André Chagnon’s exceptional economic success and social engagement by naming him a major contributor to the Quebec economy: Grand bâtisseur de l’économie du Québec.

Finally, in 2020, he was named an Honouree of the Cercle des Grands entrepreneurs du Québec, a distinction awarded to exceptional entrepreneurs whose achievements, ideals and commitment have contributed to Québec’s entrepreneurial vitality and reach.