Fourth annual Early Childhood Week: Let's join together to ensure that every child in Quebec has an equal chance to succeed 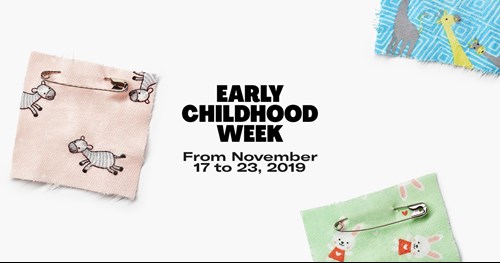 MONTREAL, Nov. 14, 2019 - Early Childhood Week officially begins on November 17 and continues for a full week, ending November 23. It represents a chance for partners, ambassadors and early childhood organizations to come together and call on the public to take concrete action so that all 530,000 children under 6 in Quebec have an equal chance, from birth onward, to realize their full potential.

People will be encouraged to get involved. They can do this by wearing the "blankie square", made of fabric resembling a baby blanket. It sends the message that early childhood is a real priority for our society. In addition, supporters will be asked to send a letter to their municipal and provincial elected officials based on a template posted to the allinforallkids.com website.

Every child deserves an equal chance to realize their potential

Most of our preschoolers are, thankfully, doing just fine. However, some children face formidable barriers to success. More than one in four children started school this year vulnerable in at least one sphere of development – and this number climbs to one in three for children from underprivileged areas. Even now, there are too many families who go through pregnancy and parenthood without outside support. Too many parents who struggle to balance work and family. And too many children who lack access to high-quality early childhood education and appropriate housing, never mind child-friendly health and social services and public play areas. Quebec needs to come together to ensure that all of our children have an equal chance, from birth onward, to get ahead.

"The youngest children in Quebec right now represent our entire future," said Isabelle Lizée, Co-Chair of Early Childhood Week and Executive Director of the Carrefour action municipale et famille. "We know that the environment children are raised in has a fundamental impact on their health, their development, their academic performance and the course of their whole life. Parents play a critical role in this, but they are by no means alone. Together, we – as elected officials, employers and citizens – have the power to act and give every child the best start in life."

Early childhood development is an issue that concerns every member of society. The fourth annual Early Childhood Week is fortunate to have the support of people from many different walks of life who have agreed to act as ambassadors. This year's team is:

About Early Childhood WeekRunning from November 17 to 23, 2019, Early Childhood Week is an opportunity to share information and open up a dialogue about early childhood development, to shine the spotlight on local and regional initiatives designed to support young children, and to reach out to the entire population. A number of activities and events will take place across the province over the course of the week.

The toddlers of today are the adults of tomorrow. Should that not qualify them for special attention from our society? It is crucial that we take collective action, from conception onward, to provide each child with the best possible conditions to thrive at every stage of development. If we start early, we can help them realize their full potential and become well-rounded adults and contributing members of society. By making sure all young children have the same chance to succeed, we will build a more just, more dynamic, more enlightened and more prosperous society.