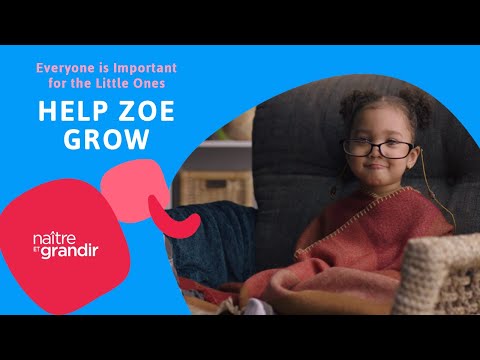 Montreal, November 24, 2017 - The Lucie and André Chagnon Foundation today launched a new Naître et grandir public service campaign on the importance of a strong entourage for the development of young children. Entitled "There's a little bit of you in them", the initiative comes as part of Early Childhood Week, a province-wide event that kicked off on November 19.

The campaign aims to highlight the fundamental role played by the people in a young child's life. Interacting with different individuals exposes children to different stimuli, which in turn enriches their development.

"Whether they get their love for camping from their Godmother Julie, their passion for cooking from Grandpa Charles, or their love for hockey from their next-door neighbour Daniel, every individual in a child's entourage contributes to their knowledge, sense of curiosity, and ability to adapt," explains Dr. Julie Brousseau, a psychologist at the CHU Sainte Justine Marie Enfant Rehabilitation Centre and a consultant for Naître et grandir. "Children learn from being around unique personalities. The more people in their life, the more they will grow."

The different roles and influences of the people in a child's life will be the subject of an ad campaign that runs until July 2018. From now through next February, video ads will be broadcast in both French and English on TV, online, and on social media. The TV commercials can also be viewed on the Chagnon Foundation website and at naîtreetgrandir.com.

In addition to various digital magazine and newspaper ads, a poster campaign will be rolling out next spring in the Montreal subway and in malls and bus networks throughout the province.

On the Naître et grandir website, parents will be able to use their own photos to create a personalized poster for each of the important people in their child's life. They can then share the posters on social media or send them to the people they want to thank for the invaluable role they play.

To round out the campaign, Naître et grandir is also publishing a new book starring the beloved children's cartoon character Chaminou. Written by Annie Langlois, the story introduces readers to the different characters in the adorable red feline's life. The book will be included with the December issue of Naître et grandir magazine, available free of charge throughout Quebec beginning December 11. Details on where to pick up a copy can be found on the French version of the magazine's website. The book will also be distributed to 60,000 families, thanks to the joint efforts of Moisson food banks around the province, Fondation OLO, and various community organizations.

About Naître et grandir
A source of reference information and motivation for parents during pregnancy and the very first years of their child's life, Naître et grandir is a website, magazine, and social campaign: all tools created to inform parents and increase social awareness about the importance of early childhood development in creating the conditions and environments that foster educational success. Naître et grandir does no advertising and has full autonomy over its content. To learn more about Naître et grandir, please visit naîtreetgrandir.com.

About the Lucie and André Chagnon Foundation
The mission of the Lucie and André Chagnon Foundation is to prevent poverty by contributing to the educational success of young Quebecers, from conception to age 17, by helping them develop their full potential. It provides long term support to groups and organizations that seek lasting, collaborative solutions to improving educational success throughout the province.

About Early Childhood Week
Early Childhood Week provides an opportunity to exchange ideas and spark conversations about early childhood development, raise the profile of local and regional initiatives dedicated to young children, and mobilize society as a whole. This year, Early Childhood Week will be held from November 19 to 25, with numerous events and activities taking place all across Quebec. To learn more, visit grandesemaine.com.