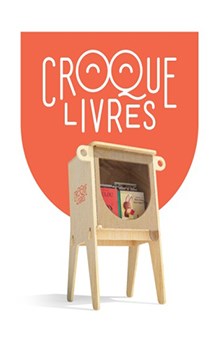 Montreal, September 22, 2014 - Have you been wondering what those little monsters are that have been rearing their adorable heads in selected parks and public spaces? Wonder no longer: they're Croque-livres: irresistible book-sharing boxes being launched today for children between 0 and 12.*

Inspired by the North American "Take a book, leave a book" movement, the Croque-livres initiative offers Quebec children free access to shared books. Adopted and managed by organizations, institutions, companies or even individuals, Croque-livres provide the perfect meeting place for children and books!

Since adoptive caregivers are given free rein with respect to decoration and setup, every Croque-livres has its own personality. Each one becomes a recognized member of its community: a friendly, encouraging presence that likes nothing better than tasty books for children! Whether they are installed inside or outside, Croque-livres are easy to find, thanks to the locator on the croquelivres.ca website.

Easy and free of charge

Using a Croque-livres couldn't be easier…and it doesn't cost a cent! Any child is free to take a book or leave one for another child to read. That's all there is to it. The books are not lent, but shared or exchanged.

History of Croque-livres in Quebec

The originators of this initiative were members of a partnership committee that came together to work toward a common goal: to encourage children to discover the joy of reading. Instigated by the Lucie and André Chagnon Foundation, this committee included the borough of Mercier-Hochelaga-Maisonneuve (City of Montreal), the Quebec association of early childcare centres (Association québécoise des CPE), the Vaudreuil-Soulanges local action committee (Comité d'action locale), the Rosement community development corporation (Corporation de développement communautaire), the Literacy Foundation and the City of Laval.

Croque-livres are just one more of the many initiatives that are springing up in several Quebec communities thanks to the work of countless organizations and individuals who have been working tirelessly for decades to give children easier access to books and promote the joy of reading.

During the summer of 2014, partners successfully tested the setup and operation of nine Croque-livres with the cooperation of community organizations in the Greater Montreal region (Hochelaga-Maisonneuve and Rosemont), Laval, and two locations in the Vaudreuil-Soulanges region: Les Côteaux and Sainte-Marthe. Encouraged by the huge success of the pilot project, a further 150 Croque-livres have been put into operation in all regions of the province by partnership groups supported by Avenir d'enfants and by local committees for language and literacy development by Montreal Hooked on School. And that's just the beginning!

Several public personalities have joined the initiative by sponsoring a Croque-livres that has been adopted by the organization of their choice.

Now that the initiative has been launched, its success depends on a high rate of participation. Partners hope to see Croque-livres rearing their heads in every community in Quebec. So don't wait a minute longer - adopt a Croque-Livres yourself or get out and share some books!

À propos des Croque-livres
Inspired by the North American "Take a book, leave a book" movement, the Croque-livres initiative is a network of book-sharing boxes for young readers from 1 to 12 across Quebec. Launched in September 2014, the initiative's goal is to mobilize communities around the joy of reading. Adopted and managed by organizations, institutions, companies or even individuals, Croque-livres are drop-off points where children and their families can enjoy free access to shared books. The Croque-livres project was initiated by a partnership committee instigated by the Lucie and André Chagnon Foundation, including the borough of Mercier-Hochelaga-Maisonneuve (City of Montreal), the Quebec association of early childcare centres (Association québécoise des CPE), the Vaudreuil-Soulanges local action committee (Comité d'action locale), the Rosement community development corporation (Corporation de développement communautaire), the Literacy Foundation and the City of Laval. www.croquelivres.ca

À propos de la Fondation Lucie et André Chagnon
The mission of the Lucie and André Chagnon Foundation is to prevent poverty by contributing to the educational success of young people living in Quebec from conception to age 17 by helping them to develop their full potential. The Foundation has established partnerships with the Quebec government in order to support local and regional mobilization in areas that are critical to educational success: early childhood development, healthy lifestyle habits and student retention. The Foundation also provides support for awareness activities and tools for parents and Quebec society as a whole.

*Translator's note: "Croque-livres" could be loosely translated as "book-muncher"! The boxes are in the shape of a very cheery monster's head, with eyes sticking out on either side and a door in the shape of a gaping mouth… full of books!

For more information or to coordinate an interview with a partner and / or an ambassador, please contact: